Welcome to the first post on Femmes & Fisticuffs! Let me start off by telling you a little about myself, and why this blog has come to existence. It all started in the beginning of the 2005 season when my best friend took me to my first Tampa Bay Lighting game. I didn't know anything of hockey before I walked into the St. Pete Times Forum, so I was definitely going in blind. The only thing I knew to do was wear a blue shirt in order to fit in! After going through the program and reading up on all the players I randomly picked one to root for, in order to break the ice. I'll admit, it's a totally chick thing to do but it definitely helped me get into the game. After that, I was hooked. I watched every game on TV, and did all of the research I could. It was then that I officially became a hockey fan. I was converted! There is nothing I love more than Lightning hockey, to be honest. Sure, we were last in the standings at the end of the 2008 season - but that doesn't change anything for me. The Lightning have a lot of heart, passion and drive, and that is what I love the most. 2008 was the season of set backs, but they never gave up! Okay, I'm getting off course now. Let me reel it back in. 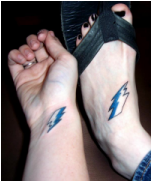 Moral of the story: I'm a 22 year old college student who is counting down the days (3 months & 5 days) til the 2008-09 season starts. I read the Lightning website and the newspaper religiously, taking in any piece of information I can. The day I became a fan, is the day my life definitely made a change for the better. Because of hockey, I've met a lot of great people and got to make memories I wouldn't have had the chance to make prior. My best friend and I even got matching Lighting tattoos in order to commemorate this time of our lives forever. In 20 years, we can look back on our tattoos and remember all of the great memories we were a part of because of this team. And that's a little bit about me, Miss Conduct.

Now, the purpose of this blog is to discuss Lightning news (and there is plenty of it now with all of the changes), but it's also a outlet for me to discuss the funnier things of hockey that a man just might not pick up on. Or the things a guy would NEVER expect a girl to pick up on and find interest in. Basically, a lot of crazy things come out of my mouth and I need a place to put them in writing. I'm not just a puck bunny. I don't go to the game dressed up in my scandalous outfit in hopes of dating a player. I rock the Lightning gear, yell when there is a bad call, and threaten the lives of away team fans. But, you can't not appreciate a cute face, or a good sense of humor. Please let me reference "Rappin' With Roy". With that being said though, I still wouldn't kick Paul Ranger out of bed.
Labels: Paul Ranger, Puck Bunny, St. Pete Times Forum, Tampa Bay Lightning, Tattoos