Andre Roy is a Badass 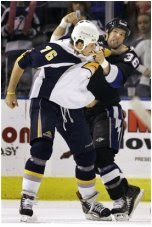 Enforcer:
Also called the policeman; is usually the most penalized player on a team; he has the job of protecting his teammates from harm; generally a larger player who is not afraid of any fight.
- Definition taken from: Ice Hockey Glossary.
Andre Roy is the epitome of the enforcer and this is why he is a badass.

I've been lucky enough to watch a few games in person where Andre has gotten into some incredible fights, or more so some incredible moments after the fights are over. My favorite has to be the fight against Branislav Mezei of the Florida Panthers back in February of 08. Although the fight wasn't the best you'll ever see, it was the after moment that really made all of the different in the world. On the very expensive new jumbo-tron hanging from the St. Pete Times Forum, all who were at the game got to witness Andre mouth the words "fucking pussy" to Mezei. (You know, I really contemplated censoring that - but seeing as how it would lose all meaning if I did...I decided against it. Get over it.) It was after this that Andre got scratched for the first round of games. But it was priceless! Sadly, I can't find any footage of the jumbo-tron fopaux, but I most certainly found the fight which is always worth watching.

Why Riley Cote and Andre Roy shouldn't be allowed on the ice together:

This little fight o' fun was taken from the December 29th, 2007 game against the Flyers at Tampa. I really wonder how many times Bobby "The Chief" Taylor says "emotion and passion" in that clip? At least 7, I'm sure.

Round one is fantastic, round two depresses me. This fight went down on March 6th, 2008 in Philly. Round two was a total knock out and Roy got his ass handed to him, but I'm not going to say that I didn't like the fact that Roy was technically undressing himself.

"ANDRE ROY IS OUT OF HIS MIND." This video straight up says it all. I think it's funny that Torts tried to step in in order to calm him down. Yeah, like that's going to work. Sadly, right after this meltdown - Roy was scratched for the second round of games due to the fact that he needs to get his temper in check. Shock.
But honestly, I think Roy might have some chemical imbalance. I say this because you see footage of him in a fight and he's a total maniac. But then you see a video that's off the ice, and he's a total goon. What's up Dr. Jekyll and Mr. Hyde?
Proof that he's nuts: (Believe me, if I could have found better quality video's, I would have used them.)
Rapping with Roy - Episode #1

There used to be this video floating around of Paul Ranger and Andre Roy running amuck at the NHL store in New York. It was pretty priceless and of course I can't find it anymore. The day I do though, I'll post it for all to see. The best part is when they are playing a various NHL video game and Andre talks about playing as Vinny or Marty. If that whole hockey thing didn't end up working out for him, he should of become a comedian because homeboy really is a spaz. But the kind of spaz that would probably pin a girl up against and wall and you know...Ha. His wife is a very lucky lady.

To end this ode to Andre YouTube style, I'm going to leave you with a final video of him rambling on in french. Ladies, it's the hottest thing you'll ever see and hear. If the Lightning don't resign him for the following season, I will be devastated. Hop to it, OK and LB!

wow, I am gonna miss rapping with Roy, and the fact that he looks like he is bi-polar, really nice guy and a freaking rabid animal on the ice, long live Roy! Hes the man

yes, he most certainly is the man and i'm devastated to see him go. we can only hope he gets traded to a team that plays against the lightning often. at least that would be fun to watch.