I'm writing this post with a very heavy heart. Dan Boyle agreed to waive his no-trade clause to go to San Jose Sharks. Although not 100% finalized, it's pretty much a done deal. His deal also includes another Lightning player (possibly Brad Lukowich) in exchange for Matt Carle along with first and fourth round draft picks. This is a very sad day for any Lightning fan. It's OK Hockey's world and we're just living in it, apparently. I firmly believe that Kuba should have been the one to be let go if they really needed money. If you keep getting rid of the players who are the heart of the team, you are going to be left with a team that isn't actually a team. The Lightning are bound to just be a group of guys that skate around. 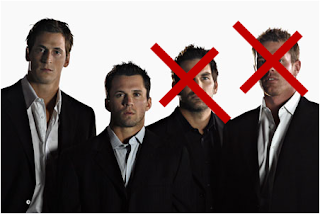 Let's talk Matt Carle for a moment. A young defenseman at the tender age of 23 didn't have that great of a season with the Sharks last year. In 62 games, he only scored two goals, and had 13 assists. In his first full season with the Sharks during the 2006-2007 season, he scored 11 goals and had 31 assists out of 77 games. It seems as though he started out strong, but then clearly fell apart last season. After reading these stats, I am not convinced he is going to be a good fill in for the loss of Boyle. Actually, I'm about 98% sure this trade isn't going to help the team. Maybe I'm just saying this because I held a spot in my heart for Boyle. Not only did I feel he was a great player and an asset to the team, but he was also an asset to the community. Tampa is going to be very sad to see him go. Also, Carle has a very awkward chin. 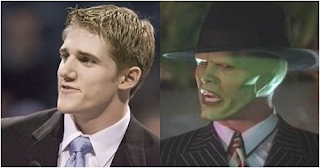 "Cousins! Identical cousins!"
Clearly I am bitter if I'm making fun of his chin. He could be the greatest guy in the world, but he's never going to replace the void that I now have without Boyle. I'm such a chick. Here is a video for your enjoyment. Listen to the comment Dan says about originally being traded to the Lightning in exchange for a sack of pucks. This is basically how he's being treated, yet again. Also, props to him for having Blindside on his list of songs to be played. I'll miss you, Dan.