I just write about hockey.

Has anyone checked out the new intro to the Lightning page? It's really quite comical. "Owners to unite us. A coach to ignite us. Players to excite us." They use three different pictures of Barry Melrose but yet they all look EXACTLY the same. Those owners that are supposedly uniting us are currently shopping two solid forwards in order to snag one more defensemen. It seems like they aren't uniting the team, they are simply just building a new one from scratch. The only thing that coach of ours should be igniting is his mullet. And how can the players excite us if they keep getting rid of the ones the fans like and have grown accustomed too? In essence, the new intro is a bunch of bull and I don't care for it one bit. Speaking of the Lightning website, did anyone else catch how quickly Dan was taken off the main banner and replaced by Prospal? I like how Prospal now gets top billing after being traded and then brought back.
Here is something I do care for though. It seems as though the paperwork that the NHL was requiring of Artyukhin has been delivered. They now have proof of his Russian contract expiring. Arty has already signed a contract for the Lightning confirming a two year, 1.9 million dollar deal. The only thing the Lightning is missing is the deal being approved and registered with the league. It seems as though it's full steam ahead for the Russian Freight Train! 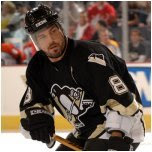 We can now add Mark Recchi to the roster as of yesterday. Recchi, a forward, was signed to a one year 1.25 million dollar contract. He played last season on both the Penguins and the Thrashers. Atlanta acquired him off waivers from the Penguins, where he only played 19 games. For Atlanta, he played 53 games and had a 40 point season with them. Stat wise, he seems solid. But don't we have enough forwards at this point in time? Shouldn't we be doing something about defense? But hey, what do I know? I just write about hockey.
Labels: Barry Melrose, Evgeny Artyukhin, Mark Recchi, Tampa Bay Lightning.com