Oh Ryan Craig, how I've missed you so.

I'm just going to come out and say that I've missed Ryan Craig. Those 72 games where he didn't play last season, I was legitimately bummed about it. I couldn't wait for him to come back, but seeing as how he got put on the injured reserve list...he clearly wasn't going to be playing much last season. Because of that injury, I was worried that he wasn't going to be resigned, and since he was a free agent - it would have been "Bye bye Ryan!". But alas, the Lightning have signed him up for another two years! I' m doing a happy dance right now. I expect really great things from Craig in the upcoming season. Seeing as how he hasn't been in a game in forever, the moment he gets on the ice, I have a feeling he's just going to tear it up. That's the kind of player he strikes me as. 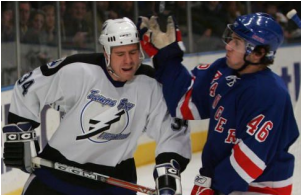 (I couldn't love that picture more if I tried.)

While playing for the Lightning he racked up 30 goals, and 57 points out of 127 games. Not completely impressive, but I really think he can offer a lot given more ice time. Play him, play him hard and I think the end results will be very good. Plus, he's really funny to watch talk because he talks out of the side of his mouth and has no neck.

Now, if only the team would get rid of Gratton because I firmly believe he no longer serves a purpose.
Labels: Chris Gratton, Ryan Craig, Tampa Bay Lightning

I have read this blog and I found it interesting . It’s a great web site promoting online jobs, if you are interested earning dollars daily visit our web site
www.online universalwork.com

I have read this blog and I found it interesting . It’s a great web site promoting online jobs, if you are interested earning dollars daily visit our web site
www.online universalwork.com