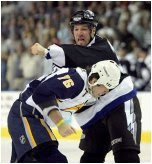 I would like to take this time to thank the Calgary Flames for signing Andre Roy to a one year contract. If the Lightning weren't going to sign him up, which they should have, I'm happy to know he's at a team with another Bolt cast away. Cory Sarich and Andre Roy are going to melt the ice with their hotness. That was ridiculously cheesy, but so very true. And you know what? Jarome Iginla is oddly attractive too. It's a good blend those Flames have. I'm happy that Roy got signed because I think he's too good of a player to not be on a team. His contract is crap though, only getting $550,000 for the year. But I suppose beggars can't be choosers considering the season he had. After reading some interviews with Andre, it seems as though he didn't feel all too secure about getting another contract with a team due to the fact that he had been scratched for 15 games and the whole Kote incident. Please refer to "Andre Roy is a Badass" for any further questions. I'm glad he's going to continue playing. And hey, maybe the Lightning will pick him back up after his year is over with the Flames. How's that for being optimistic? I definitely will be paying more attention to the Flames this season, that's for sure.

You know who I do feel really bad for? The girl that goes to practically all of the Lightning games with her Andre Roy face paint. She's a Roy super fan, and will apparently have to move to Calgary now. Bring a jacket. That's all I have to say.
Labels: Andre Roy, Calgary Flames, Cory Sarich