Warm and Fuzzies for Vinny 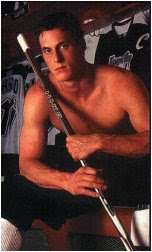 Maybe it's just me, but I honestly believe signing Vinny Lecavalier to a 11 year extension is bizarre. It's all for show because you know they probably won't keep him the next 11 years. Contracts aren't what they used to be, and apparently are very easily broken as we've seen in the past year with Brad Richards and Dan Boyle. This 85 million dollar deal begins in the 2009-2010 season and salary will be 10 million dollars for the first six seasons. After that, it'll trickle down. In 2016-2017, he'll receive 8.5 million dollars, 4 million dollars the following season, 1.5 million dollars in 2018-2019, and he'll finish off his time with the Lightning with 1 million dollars in 2019-2020. 2020. I can't even think that far ahead. My god, I'll be 34 when the season ends in 2020. Hell, Vinny will be 40! Homeboy better retire after that, or he'll be the next Gary Roberts and skating way after his prime.
Although I can't help but assume the contract won't last the 11 years, it's definitely very nice for Lecavalier to know he was drafted by a team in 1998 that wants him for his whole career. That must give any player the warm and fuzzies. Plus, the paycheck doesn't hurt either. I'm glad Vinny will be on the team for quite some time though. Mostly because I think he dresses nice (or just wears nothing. refer to picture, please.) and he is doing a lot for the local hospitals. Also, I marvel at the fact that his nose is so straight and I'm sure he's gotten clocked in the face often. You see, I don't like Vinny for the fact that he actually does produce, I like him because his nose is straight. I also like him because he's bff with Brad Richards and I think it makes for a nice story. Or maybe it's the fact that he's capable of an 100 point season. You will just never know what reason it really is!