Where Are They Now?

During my years of being a Lightning fan, I've seen some great players come and go. But where are they now? Here is an entry in dedication to all of the players that I've loved and lost. I'm not going to include Boyle, Lukowich, and Richards because I'm still mad about it and I'm not one for pouring salt in wounds! But I will say this - I drove past the Forum yesterday and on the building is a HUGE poster that says "See Vinny, Marty, Dan and Stamkos." It's a little hard to see Dan when he's in California. Also, the picture of Stamkos is him shooting left when he actually shoots right. Way to go, Lightning. You know they must have recently put up the poster if they have Stamkos in his Lightning sweater. How about you not waste money on advertisement that you're going to have to take down seeing as how it's outdated now? It's really stupid how the organization pisses money away on advertisement and publicity that will inevitably become outdated in two weeks. First the Fantastick Four posters with Richards, and now this new one with Dan. Stupid. Stupid. Stupid. I'm done ranting. Now we begin Lightning's version of "Where Are They Now?"

Ruslan Fedotenko was awesome Left Wing, plus adorable too! Playing for the Lightning for four seasons, he scored 74 goals out of 313 games. He also had quite a few assists and penalty minutes under his belt. Let us not forget that he also scored the Stanley Cup winning goal in 2004. So, what happened to him? In 2006, the Lightning signed a 1.65 million dollar one year contract with him. Once that contract ran out, he signed a 2.9 million dollar contract with the Islanders and had a 33 point season with the team. Just recently he signed a one year contract with the Pittsburgh Penguins. (They keep giving me reasons to be a fan. Fleury, Crosby and NOW Fedotenko?) Oh, how I miss the announcer saying that wonderful Ukrainians name. 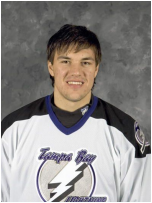 Evgeny Artyukhin is on my list of players I miss as well. In 2006-2007, the Lightning didn't offer him the million dollar contract he was seeking. He even lowered the price he wanted to $750,000. So, instead of playing for the Lightning who still had the rights to him, he went back to Russia. Prior to the 2007-2008 season, they offered him a $475,000 contract. Artyukhin rejected this contract, stating that the Lightning were punishing him for not resigning one year ago. But now, he is expected to sign a two year 1.9 million dollar contract with the Lightning for the 2008-2009 season. I'm definitely looking forward to this going down. The contract cannot being signed until the NHL receives a letter stating that his contract in Russia has officially expired. Arty could be back, and this is going to get VERY interesting especially because of how much of a schmuck he turned into when it came to money. 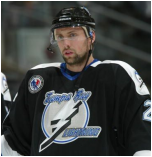 Dmitry Afanasenkov can now be found playing for Dynamo Moskva in the Russian Hockey League. Dmitry played for the Lightning on and off from 2000 to 2006. Right after the lockout, he had a hard time producing as well as he did prior to the lockout, and the Lightning put him on waivers after 33 games. After that he was traded to the Flyers and finished off the 2006-2007 season with them. While on the Philadelphia Flyers, he was given the nickname "The Shark". Although mildly scary looking, there is nothing cooler than his last name. Just keep repeating it out loud, it'll change your life. 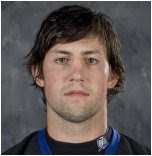 When Cory Sarich started on the Lightning in 1999, he was very awkward, unsure of himself and played only 17 games. But then as the seasons progressed, he started to get more ice time which definitely led to more penalty minutes. Also, as the years went by Cory got hotter. Now, I know that your level of attractiveness does not go hand in hand with how you play but its fun to see. In the 2006-2007 season, Sarich had definitely reached his maximum hotness when he let his hair grow out and either dyed it brown, or stopped making it blond. Either way, it was definitely working for him. And this of course is when he gets traded to the Flames. While playing for the Flames he had a 7 point season, but also racked up 135 penalty minutes. December 12, 2007 Sarich became the NHL's new iron man when he played 419 consecutive games. This streak ended though on March 1st, 2008.

Next on my list of who to miss is Pavel Kubina. Kubina was on the Lighting from 1997 to 2007. Going by the nickname of Kubby (how cute!), he had a 38 point season which was a high for him, during his last season with the Lightning. Pavel was traded to the Toronto Maple Leafs for the 2006-2007 season, and signed a 20 million dollar contract for four years. With the Leafs, he just finished off a career high season of 40 points. Kubina was a great defenseman to watch and you can't hate him when you hear KUUUBINNNAAAA over the speakers of the St. Pete Times Forum. 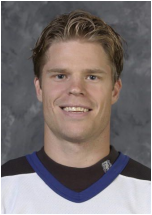 Freddie Modin was a button of a Left Winger scoring 31 goals and 20 assists during his last season with the Lightning in the 2005-2006 season. Originally traded to the Blue Jackets in order to acquire Marc Denis (another swell decision by the Lightning), he has seen some setbacks. In the 2007-2008 season, he only played 23 games due to back spasms that were caused by two fractures. Modin believes the injury happened during a November 1st game in Anaheim when he was hit from behind along the boards of the defensive zone. This injury comes only a few months after the Blue Jackets signed Modin to a three year extension that pays him 3.25 million a year.

Walking down memory lane has officially come to an end. Although, there are more players that I still hold a place for in my heart, those are my top six. At least there is a possibility that Arty could be playing in the Lightning sweater again. That almost lessens the blow of losing both Boyle and Lukowich. Almost.
Labels: Brad Richards, Cory Sarich, Dan Boyle, Dimitri Afanasenkov, Evgeny Artyukhin, Freddie Modin, Marc Denis, Pavel Kubina, Ruslan Fedotenko, Tampa Bay Lightning